After comments of “STEM Sorority is a sorority— we should do sorority things!”, brainstorming was done and an activity was planned for Friday, Feb 26, Science Pong.

Science Pong is a variation on the quintessential sorority party activity, beer pong. To set up for it, we pushed Ms. Chan’s tables (with horrible screeching sounds) into medium-length rectangles, where we set up nine cups arranged into a triangle at each end. 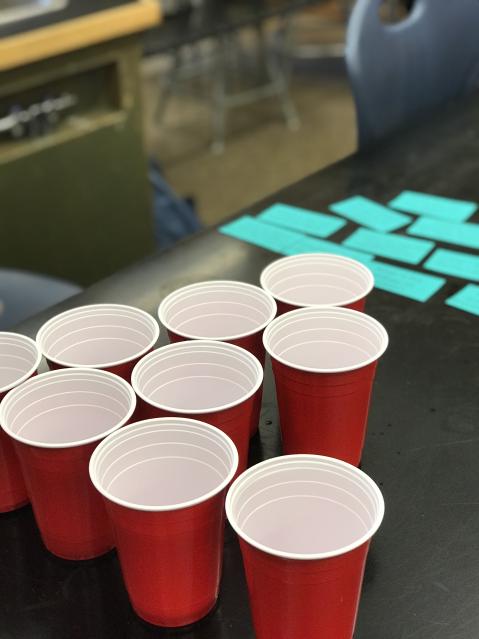 The basic principles of Science Pong were similar to beer pong: toss a ball into numbered cups at the opposite end of the table. At this point, you would answer the science trivia on the corresponding flash card.

The trivia varied in difficulty, from naming the organelle for cellular respiration (mitochondria!) to balancing a chemical equation, or solving a trinomial. If you didn’t know what it was, then a vague hint was given, or the cup was replaced. 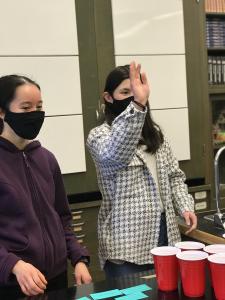 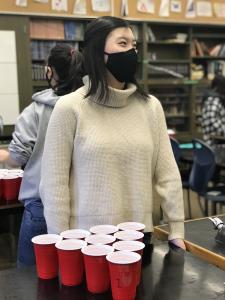 Near the end, a game of Mega Pong commenced. Under the mildly disapproving glances of Ms Chan and the judgemental glares of glassware in the cabinets, ping pong balls were flung across the room. After a series of misses, projectile motion was brought up. The general consensus was that, while calculable, it would be too difficult to perfectly align the throw.

“There was a lot of good energy, and everyone participated,” commented Alanna R., a member of the club. “I’m biased, because I won my round, but I thought it was super fun.”

Indeed, the vibe of the day was pleasantly excited, chaotic but controllable, and the general mood indicated that this too was a roaring success.